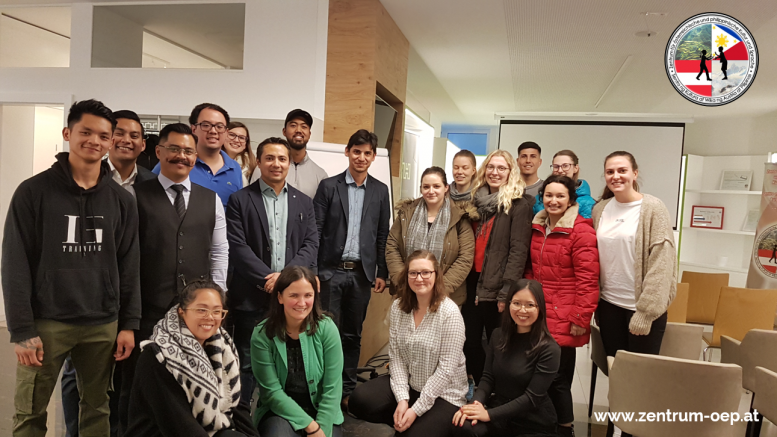 Upon the request of the Department of Geography and Regional Research of the University of Vienna, Sentro has conducted for the fifth time on January 10, 2020 a presentation about the Filipino Community in Austria.

Prof. Dr. Patrick Sakdapolrak, head of the institute included the presentation as part of his yearly course Excursion Human Geography: Migration, Integration, Translocality in Vienna. It aims to provide students with an insight into the work of organizations based in Vienna that are dedicated in areas such as migration, integration, flight and asylum which are central themes of human geography research and teaching.

The 20-student group had received an overview of how the Filipinos have blended their lives socially and culturally into the Austrian society. The two hours presentation was started by Ralph Chan, a young Filipino-Austrian academic, doctorate student of sociology and a dynamic Sentro member. He introduced the ongoing projects and activities of the organization, such as the Sentro Book which is aimed to be published in 2021, the Tagalog language course and the Sentro Summer Camp and Sentro’s collaborations with other institutions.

Dr. Bianca Weninger, a long time Sentro team member and a community volunteer expounded on the influx of Filipino migration worldwide, the first nurses who arrived in Austria in 1970s. This had distinguished the bilateral relationship between the Philippines and Austria. She also discussed the various social and regional associations of the Filipino community and their activities.

Mag. Philip Weninger described the Overseas Filipino Workers’ (OFW) unwavering determination to support their families at home financially through their remittances and sharing the Western taste by sending ‘balikbayan’ boxes, packages containing consumer goods and other items sent by OFWs to their relatives back home. Philip, who grew up in a household of a Cebuana mother and Viennese father, further explored the question whether today’s generation would continue to remit as their parents do and send boxes to their parent’s relatives.

One of the main objectives of Sentro is to highlight how equally important the Austrian and Filipino cultures in the lives of the young Filipino-Austrians – who are the focal audience of the non-profit organization’s activities. This goal was explicitly demonstrated by Jeff Santiago, one of the invited presenters this year, a freelance personal fitness coach and a Vienna-born Filipino-Austrian. He elaborated how the Filipino values of family closeness and being a ‘kuya’ (Tagalog for elder brother) influenced his perception on social responsibility and cultural adaptability. His clientele come from various cultural backgrounds and social status.

During the question and answer session of the presentation, one of the students had asked “Could you tell us if you would identify yourself as a Filipino/Filipina or an Austrian?” A very challenging question which defies an answer and had provoked emotions not only among the young Austro-Filipinos, but also among the students who were raised bi-culturally. Lizette Ikan stated “I am both. I am a Filipina and I am an Austrian.” Her parents both hail from the Philippines. She is trying to live the most beautiful values of both cultures. “I have actually never thought about that until today.”, said Albert Christian Gonzales, another presenter and a martial arts trainer whose motivation to teach derives from his vast interest in various types of martial arts and to get to know multicultural people.

The presentation which is part of the “Philippine Lectures Series” of the organization was held in the elegant showroom of the Hart & Hart Bauträger GmbH in the 22nd district of Vienna. Mark Sarmiento-Melchor, the head of international sales welcomed the participants. He is a Filipino-Austrian and visits his relatives in Batangas every year.

According to Prof. Sakdapolrak, he and his students were pleased to acquire a background of first-hand experience by the second-third generation of Filipino migrants. The students have gained personal insights about a community whose cultural values contributed to its people’s pleasant integration in the Austrian community. The university department head expressed his hope that Sentro will continue to provide such presentation to his students.

To see our previous presentations, please refer to Vorträge.

Text and Photos: Arlene Castañeda, founder and head of Sentro